You are here: Home / News / Statement from the NSLA Equity and Racial Diversity Committee on Halifax... 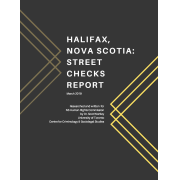 Personally, after years of examining these issues, I believe that only a small proportion of the racial disparity in police checks can be explained by overt, malicious racism. Although the negative impact of a few “bad apples” cannot be completely discounted, I believe that most police officers in Halifax, and other Canadian cities, are professionals who try to conduct themselves in an objective manner. They certainly do not consider themselves racist and thus feel deeply insulted when accused of racial bias or profiling. However, I do think that implicit or unconscious bias can play a role in who the police “feel” are suspicious and thus deserving of police attention (including street checks).  I also feel that the police – like other segments of society – engage in forms of “statistical discrimination” that can have a profound impact on policing outcomes. Much like the actuarial reasoning practices employed by insurance companies, police engage in forms of criminal profiling that target the usual suspects – the poor, the young, men, racial minorities. These forms of informal risk assessment can directly contribute to the overrepresentation of young Black men in street check statistics. Finally, we must also explore the impact of institutional forms of racism – including police deployment practices – that can have a hugely disproportionate impact on Black and other minority communities.

Dr. Wortley in his recommendations, stated as follows,

Street checks should not be conducted solely on the basis of a civilian’s personal characteristics including race, ethnicity, gender, age, religion, sexual orientation or combination thereof. Police officers should not engage in actuarial discrimination and stop, detain and document civilians because their demographic profile is consistent with criminal profiles derived from aggregate crime statistics. Decisions must be based on individual level, not group-level suspicions. Group-level suspicions are consistent with the concept of racial profiling. The policy should also explicitly state that street checks should not be conducted simply because a civilian is observed walking or driving late at night or is physically present in a high crime community. Street checks are also not justified when a civilian has exercised their legal rights and refused to answer police questions. Street checks are also not justified simply because an individual has exercised their legal rights and decided to end an interaction with a police officer. Rightful noncompliance with police requests or commands does not provide the legal justification for increased police suspicion or street checks. Finally, the regulation should explicitly state that officers should refrain from investigatory police stops and/or street checks based on a hunch or intuition that a person may be involved in criminal activity.

NSLA affirms that street checks, or any form of police-civilian interaction, including police stops, must be within the legal parameters set out in the Nova Scotia Human Rights Code, Canadian Charter of Rights and Freedoms, legislation and the common law.

We are here to assist Nova Scotians by protecting their rights and freedoms and ensuring a fair hearing in a court of law or before a tribunal. In keeping with our Strategic Plan, NSLA remains committed to enhancing access to justice for historically disadvantaged Nova Scotians. In meeting that commitment, we recognize the over-representation of African Nova Scotians in the criminal justice and child protection systems.  We will continue to provide culturally responsive service by educating our staff on these issues and by bringing cultural impact to the forefront on matters before the Court.

We want to work in collaboration with the African Nova Scotian Decade for People of African Descent (ANSDPAD) Coalition with the goal of addressing systemic issues, including overcoming any barriers to access to justice. On behalf of our clients, NSLA will be proactive in engaging the Nova Scotia Government with an aim to be included as a stakeholder in discussions of how to resolve this issue moving forward.

It may be of assistance to read the article authored by Angela Simmonds entitled, “Racial Profiling: Know Your Rights” from our partners at the Legal Information Society of Nova Scotia.